FXCM (Forex Capital Markets) is a very big and well-established FX broker based in New York. It has been listed on the New York Stock Exchange since December 2010 and has over 875 employees.

FXCM has its own trading platform and also provides services through third-party platforms, including the popular MetaTrader4. FXCM is open for both institutions and retail traders. Clients outside the United States can also trade in contract for difference (CFDs) on indices and commodities. FXCM owns the Forex news site DailyFX.

The company Forex Capital Markets was founded in New York back in 1999. It is one of the pioneers of online forex trading. FXCMs first office overseas was opened in London, 2003, regulated by the UK Financial Services Authority. Five years later, offices were opened in both Paris and Sydney. Since then, FXCM offices have been launched in Hong Kong, Tokyo, Dubai, Jerusalem, Tel Aviv, Beirut, Athens, Milan, Berlin, Dallas, San Francisco, and Santiago de Chile.

When FXCM made their Initial public offering in late 2010, they became the first forex broker ever to IPO in the United States. 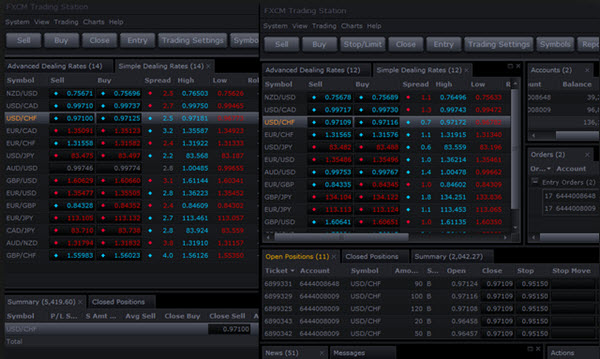 Trade execution is usually very quick and without snafus.

FXCM employs a “no dealing desk” business model for their currency products. The prices are taken from a number of major banks, and the platform allows the clients to trade at the best available price at any given time. FXCM does not adhere to the market maker model used by many other forex brokers. Instead, they use the direct market access (DMA) model.

FXCM has floating spreads. Sometimes the spreads are as low as 0.2 pips for liquid trading pairs such as USD/CHF, EUR/USD and USD/JPY.

FXCM rarely have any promotional offers.

The FXCM customer support can be reached by phone, email, fax, and live chat. Toll-free phone numbers are available from certain countries.

Most major credit cards are accepted, as well as Automated Clearing House (ACH) transactions. Clients within the United States can even use paper checks.